Posted on September 29, 2014 By willworkforadventure

I have come to the unfortunate conclusion that triathlons just plain hate me. There is no question about it. Maybe it’s the fact that I got into them last year only after tearing my ankle pretty badly in a freak ice climbing fall.

Wait.  Where did my ankle actually go?

Whatever it is, I’ve yet to have a good lead-in to a triathlon.  The above picture shows my lead-in to Timberman last year (my first triathlon).  I wrote about the week from hell including a T1 flat in Syracuse (my second triathlon).  Since Timberman #2, I was waiting in the water at the Lake Tahoe IM for my first full ironman to kick off when it was cancelled due to a wildfire. Funny that I had a good lead-in to that race. I should have known something was up.

As for the mishaps leading up to race day for Timberman this year, there were quite a few.  About a week before, the rear derailleur shifter on my bike came loose. It wasn’t off completely, but it didn’t give me the warm fuzzies about race day.  The bases to the elbow rests on my aero bars also decided to break around this time.  They cracked along the outer edge, so I needed to keep my elbows tucked tight or risk collapsing off the edges of them.  My Stages power meter battery cover somehow broke off.  My left calf picked up a tweak, which is still bothering me over a month later.  To add insult to injury, a bee crawled inside my helmet and stung me while riding not once but on two separate occasions.  Everything but the bee happened within 9 days of race day.  As a final kick in the balls, my truck’s battery died at the race site on race day due to leaving a light on.

Most of it got dealt with luckily.  My bike shop handled the bike repairs although Trek was a huge pain with warranty replacements. I can understand not dealing with a consumer directly for a mechanical part, but elbow pad bases are easy to diagnose and install. Stages sent me multiple battery covers overnight. Awesome customer service.  I went to ART for my calf, but that didn’t help entirely.

Enough of my incessant whining.  Here’s how the race kicked off. 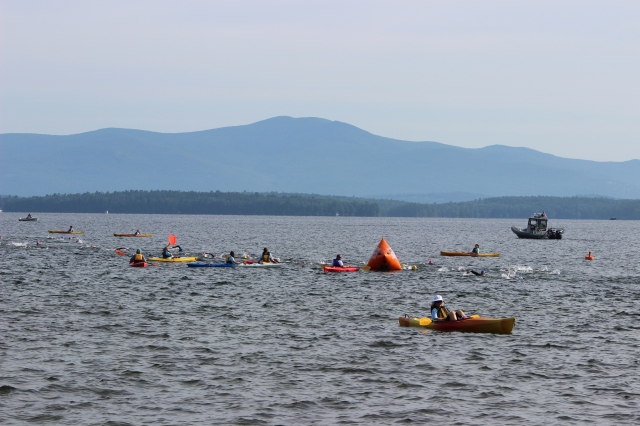 The swim was a single clockwise loop in beautiful Lake Winnipesaukee.  I’ve yet to have a bad swim in any of my triathlons, so this was a first for me.  I lined up a few rows back on the right/inside of the swim course.  Previously I’d line up to the center or left.  Holy shit did I get the snot beat out of me. Some people will say that if that happens, then you didn’t seed yourself correctly. I don’t think that was the case. The people in front were moving slow as a single unit essentially creating a wall.  The person on my right was right in sync with them too. The people on my left and behind me decided that their best option was to try to swim over me. By 200 yards in, I was gasping from being dunked so much. I never thought I’d do it, but anytime I felt somebody on my elbow or feet, I was throwing blows with bad intentions.  Self defense if you ask me.  I get it.  You want to go faster.  So do I.  I’m not enough of a dickhead to drown somebody over it though.  Next time line up in the front.

Other than the first half mile, the swim was pretty uneventful.  I didn’t find anybody to draft really.  The only people I could latch on to were the really fast people from the wave after me.  A few caught up to me after making the final turn toward shore.  I’d latch on for as long as I could comfortably hold it, lay off, and wait for the next guy.  My goal was a 33:30 swim, so with all the start BS taken into account, I came pretty close to nailing my time. 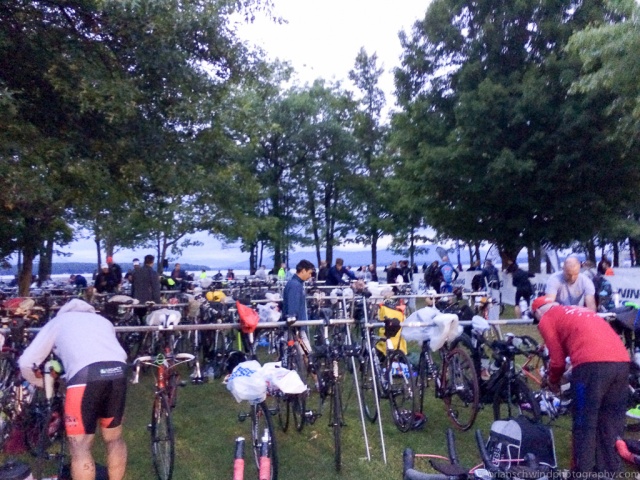 Admittedly this was a little long.  I need to get better at the swim to bike transition. 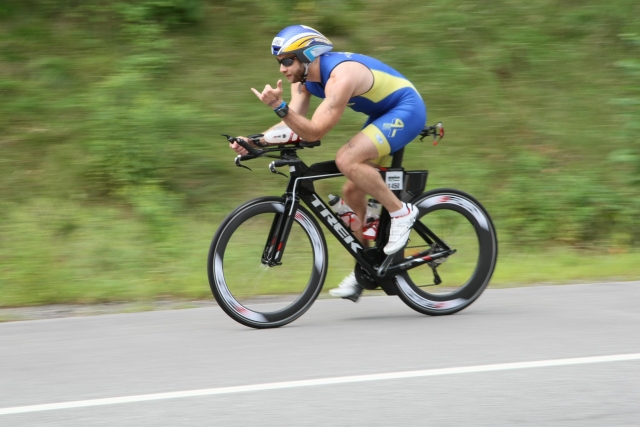 This is where my day started getting away from me. I was shooting for a sub-5:30 finish with a 2:48 bike split.  I felt pretty good up until the turn around when my legs just lost all their power.  I think I was in the right shape for my goals.  Looking at my stats, I had a lot more room in terms of heart rate. When I tried to dig and push the pedals harder, my legs just weren’t there.  I made some mistakes the week before.  I decided to still squat and deadlift heavy on the Tuesday prior to race day, and just as timing would have it with out of town visitors and work functions, I had 3 late nights out with some heavy drinking in the 8 days leading up to the race; the last one being Thursday night.

I enjoy the Timberman bike course.  I had on my climbing gears that I was testing out for the coming killer course of Ironman Tahoe.  This was a compact crank with a huge cassette for 34×32 total.  My god is it’s almost too easy to climb with this.  I say too easy because while I was comfortably spinning my way up the hills, people with smaller gears would pass me cranking away.  Sure they were using more energy, but the climbs were short enough where a brief anaerobic period wouldn’t hamper you the rest of the race.  I think I lost some time here.  The course itself is punctuated with the same 3 large’ish climbs right at the beginning and right at the end of the course.  The rest is rolling with a long section of false flat (down hill on the out and uphill on the back).

The road condition is so-so.  Most of it is pretty decent, but there are spots where you may well be riding over rail road tracks.  The views are largely suburban too, so you don’t have many glimpses of the sprawling forests and mountains that are so close-by.

For the sake of consistency between transitions, I got caught in a porta-potty line and stupidly did not bring any sunscreen with me.  The sun was out, so I needed to run to the table to get some protection.

The run is a rolling double out-and-back.  The aid stations are nicely packed in there, and it goes through neighborhoods along the lake.  You are treated to the occasional beautiful landscapes of the lake and the mountains beyond, and you also have a lot of locals partying and cheering you on from their front lawns.  There are two “climbs” one of which is semi-steep that make the course a little challenging.  It’s nothing major, but hitting it twice in each 6 mile block can wear on the legs of those that didn’t pace that well.

I felt the lack of leg power and my calf problem here too.  I decided that I’d lay back for the first loop and then slowly start to increase my intensity level through the second loop.  As I started increasing my intensity level on loop 2, my calf just felt too weird.  I didn’t want to push it too hard and have it cramp up with 4 painful miles left, so I layed off the gas until I was a couple miles out from the finish.  Then I turned it up to a comfortable amount.  My calf held on for the ride, and I finished feeling stronger than I do at the end of most races.  I definitely had a lot more in the tank, but today was not to be my day.

This is a personal fave of mine.  Maybe I have a soft spot for it because it was my first, but the location and the course are great.  If they work on those 2 sections of road, this would be near perfect.  Logistics as with most Ironman races were great.  Check in was a breeze as was transition setup.  Ironman village had plenty of vendors and much to my surprise, there was plenty of food to be had at the race site.  Maybe I missed that on my first year, but I hadn’t seen it before.

I didn’t make my sub-5:30 goal, but I feel I could have easily nailed it on a better day.  I was only 12 minutes away, and that’s time I could have made up on the bike alone.

The button pushing is a little hectic with the transitions, so these aren’t entirely accurate.  They paint a good picture of the day though.

The bike remains my weakest event.  It doesn’t help having dead legs, but I’d have lost ground regardless.  It’s a bummer coming out of the water in a decent position only watch people scoot by throughout the bike course knowing you won’t be able to catch them all on the run.

← Ironman Tahoe – So hard that everybody DNF’ed
Can you feel the power? The 4 week training block →