Posted on March 24, 2014 By willworkforadventure

The Event: Metro Dash is not a mud run, but it is an obstacle race. It’s a challenging sprint through a “gut wrenching, muscle pounding, make you want to through up (their typo not mine) obstacle course”. In a type of racing dominated by longer distances with 5000 meters being considered short, Metro Dash offers a unique experience by packing obstacles into 600 meters.

Getting There & Parking: Getting there was not a problem since it was held in a mall parking lot, and there was obviously a ton of parking. No signs that I saw.

Check-in & Logistics: Check in went smoothy, but it was a little convoluted. If you got there at the wrong time, I could see waiting in line a while. You had to “check in” at one station. Then you had to go to another station to get your timing chip. On top of that, they didn’t have the shirts at the finish line, so mixed in with people trying to race there were people done racing looking to get their shirt at the same stations.

Nevermind the fact that they didn’t even have shirts half way through the morning. They needed to get another shipment in, so if you raced past 9:30am, then you could either wait around until 12:30 for your shirt to get there, or you could add your name and address to a list to have it sent to you.

The Schwag: No cheesy free samples, but racers got a cheesy shirt and a good race medal. The shirt is white and made from a same flimsy almost entirely see through material as the shirts I get for free when ordering supplements online. Unless you like wearing mesh shirts and showing off the goods underneath as a fashion statement, you probably won’t be wearing this shirt without an undershirt.

The Race: For a racer’s view of the course, check my video…

The race was done in waves split by 30 minutes, and each one of the waves itself was split into sub-heats of 4. I really liked this approach as it prevented bottlenecks at the obstacles and really allowed you to sprint through mostly unimpeded. While waiting for your turn to go, there wasn’t much in the way of DJ entertainment. You just got to watch other racers get let go and wait for your turn.

When your turn finally did come, you were released in a quick sprint to a rope ladder climb. After climbing up and down that, you were immediately off to a pull and push sled event where you pulled a sled towards you by rope. Then you grabbed the sled and pushed it back to its original location. Tired yet? Too bad. Now you’re off to the tractor tire flip. It was a whirlwind start and got you huffing and puffing right off the bat. I saw a lot of people struggle with the sled because they didn’t get low enough.

After flipping the tire tractor, it was over a 5’ wall, through a short crawl tunnel, over another 5’ wall, and off to the cargo net climb. I was actually a little clumsy here as I climbed up the net. This was a cool cargo net climb because most events have A-frames. This was a straight shot up and down, so if you fell, it would hurt. 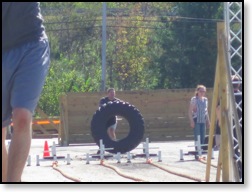 Once over the net, it was onto a series of plyo boxes for some box jumps. That was followed up by a medicine ball carry. You could really see some people start huffing and puffing. With the lungs burning a little, it was off to some barriers that could have been over-unders. I just went over them all. This led into the 10 lbs farmer’s walk. 10 lbs? Really? I understand we’re not strongman competitors, but how about a little challenge. It was a quick run to over some more barriers and then a balance beam A-frame.

Then it was the kettlebell farmer’s walk to the monkey bars. It was a very short monkey bar traverse to a scaffolding climb that was directly followed up by an 8’ chain-link fence climb. After another pair of 4-5’ walls, the course took you to a sandbag carry. I was a little winded here and shamefully allowed myself to walk a little instead of pushing through. The sprinting nature of the course was starting to sink in as I realized I was basically done with the course. 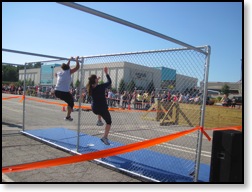 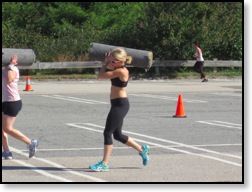 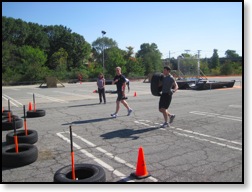 The next obstacle was an ankle-high series of hurdles to a low crawl. After that, I thought we were hitting some tires with sledgehammers, but it turns out you just had to carry a sledgehammer for distance and carry a tire for distance. Then you hit a series of balance beams. One was made of scaffolding and had strap to grab for balance. The others were the typical wood ones that led to a window to jump through, an uneven wall to scramble over, and another low crawl covered in a tarp.

Now you were home free. You had a short log carry followed by a sprint to the finish. If you blinked you may have missed it. This was definitely a sprint and a short one at that.

The Verdict: The course was pretty cool. I liked the format, but they didn’t deliver on all the obstacles they said they would, and you felt it. It could have done with a couple more obstacles. Since this event already has a Crossfit flavor, it’d be cool to add in something that may pose more of a challenge like say kettlebell thrusters, swings, or compound lift variations. Something that would really tax lower and upper body. There really wasn’t much to this event outside of the course. There was no food or drinks for sale. There was no DJ, no kid’s course… hell there wasn’t even a bag check.

Don’t get me wrong. The course itself was good, but the event as a whole was rather dull and was lacking. This format event definitely has some potential. Add in some more challenging obstacles and add a little more to the event itself, and this would be a must-do. As it stands, I’m not sure if I’d run it again. One positive direction they are moving in starting with this race was the inclusion of a champions heat where the 20 top men and women go head to head. 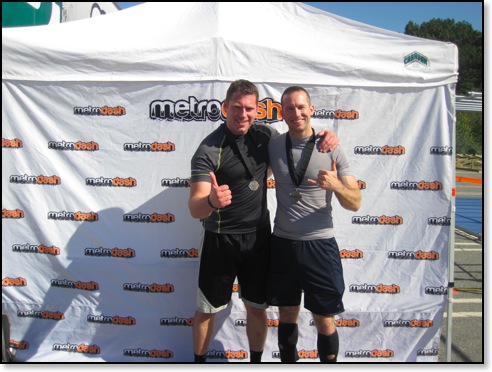