Posted on June 12, 2014 By willworkforadventure

This year’s Peak Ultra was to be my first “ultra distance” event where I wasn’t rucking a heavy load, doing manual labor tasks and calisthenics, and/or running through obstacles.  It’s just running or as close to running as you can get while scaling steep trails and traversing through deep mud.  For those that don’t know, Peak Races is the sister company to their more well-known and popular Spartan Race series.  I feel the events Peak puts on are a little closer to the founders hearts, and you feel their love for these events while on course.  They put on a 500, 200, 100, 50, 30, and 15 mile race all at the same time.  The 30 and 50 milers share a large portion of their courses.  The larger distances did 10 mile loops on the mountain by Riverside Farm.

The race itself started in traditional low-key fashion.  Race director Andy lined us up on a country rode, gave a few brief words on how crappy conditions on the famed Bloodroot mountain were, and then said “go”.  We quickly dashed downed a steep descent in a large group.  After a only a minute or two I looked at my heart rate, and it was already at 163 bpm with a pace in the 8:00’s.  Unfortunately with my triathlon focus this year and my first “dress rehearsal” half Ironman triathlon in a few weeks, I had chosen to keep this race well within training run intensity so that I could train through this event.  I had done 8 hours of training already in the week leading up to it, and I intended to get at least 20 total hours the following week.  I can’t do that with beat up legs. 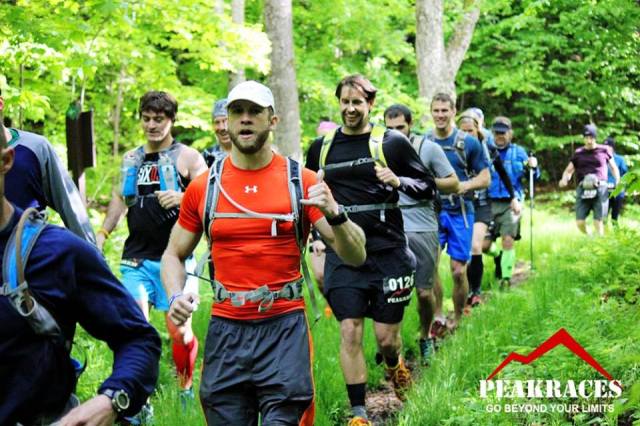 The strategy was to keep my heart rate mostly in Zone 1 (<75% MHR – <144 bpm) with some time in Zone 2 (<85% MHR – <164 bpm) and walk the steeper descents to save my legs.  I quickly put that into effect and slowed my pace down only to have a very large pack of runners surge past me.  It was very hard on the ego not to keep up with the surging runners, but I laid back and settled into a relaxed pace.  The steep descent had led to a good ascent, which lasted a few miles before descending down a wide dirt road to Bloodroot.  This was to be some of the best terrain all day.  I even felt comfortable enough to stop a snap a shot of Bloodroot looming in the distance.

Once to the base of Bloodroot, all thoughts of staying in Zone 1 went out the window.  I had to switch plans and just try to keep my heart rate in as low of Zone 2 as I could.  I ended up averaging 152 bpm for the entire race, which is a pretty casual effort.  Bloodroot and the other ascents definitely tried to thwart those plans though.  Ascending up Bloodroot we were greeted with deep stretches of mud that got your feet wet even if you tried leap frogging over them.  The steep climb threatened to make my heart rate soar, so I layed back and started doing something I picked up mountaineering on tall peaks out west.  It’s called the mountaineer’s rest step.  The technique is to lock your downhill knee with every step allowing your body to be supported by your skeleton rather than your muscles.  It gives you a brief rest with every step, which adds up over the course of the climb.  I saw my heart rate immediately drop when I started.

You kind of zone out during hikes like this. You just get lost in the rhythm of your breathing and steps. Before I knew it, we were an hour and 30 minutes deep into the race, and I had to stop for nutrition. I was also experimenting with a new nutrition plan that I plan to use in my triathlons. I was using primarily water mixed with Osmo in my Osprey Raptor 18 hydration pack. After the first hour, I’d consume a Gu gel on the :15 and :45 minute marks and then a Honey Stinger Waffle and sip of Gatorade at the :30 minute mark. I’d also re-apply bug spray.  Due to this plan, I stopped to eat the waffle and apply the bug spray.  I could almost feel other runners getting further and further away.

Determined to stick to the plan, I trudged on up Bloodroot.  To my surprise, I started seeing people up slope.  At this point, I started feeling like the tortoise from the Tortoise and the Hare story as I made my way with my gradual plodding pace.  Soon enough I started passing some people that were redlining from pushing so hard.  Finally to the top of Bloodroot, and I passed a whole pack of people that had stopped there to eat and hydrate.  This led to a very steep and technical descent that I decided to walk that led to a mixed descent that I took a run/walk approach on.  Some of the folks that I had passed, flew past me. I shrugged my shoulders and continued on.  At the bottom of the descent was an aid station with burgers, dogs, and beer.  This is my type of race!

Unfortunately that led to another ascent.  This was to be a trend.  This race had very few flat sections.  My Garmin ended up saying it was over 16,000′ of elevation change, but I believe that closer to 15,000′.  The barometer can foul things up at times.  Still, that’s a big day.  Here’s a link to full Garmin break down – My Race Stats on the Garmin

On this ascent, I started reeling people in again.  I caught up with a guy whom I spoke to a lot in the first few miles of the race and we hung together for a bit before he took off up ahead.  I got to meet a few more people as I shared my bug spray too.  At the top of the climb at around mile 11 I finally passed somebody looking beat that I had leap frogged with for a while and never saw him again.  Oddly he finished way ahead of me.  Things that make you go hmmm…

After another descent, I hit the midway checkpoint.  A couple guys passed me teasingly talking trash.  They were good dudes, and I joked back with them.  After this checkpoint, we hit some better terrain.  It was rolling, but there was no mud.  I’d run until my HR hit 155 and then I’d walk until it was under 150.  Rinse.  Repeat.  This led to more muddy trails that made me a bit nostalgic.  In my Death Race bid, I had gotten lost with a group of people, and we had ended up on this very trail.  I was reliving that moment for a lot of the steep ascent and mud hopping.  It was simply beautiful terrain thus far.  Sure there was mud, but you were in this  beautiful green forest with tall plants all around.  I reeled in a couple more people including a girl that I was very impressed with.  It was her first event of even marathon distance, and she was still looking strong.  After that, I got reeled in by one of the trash talkers.  I’m not going to lie.  The dude psyched me out a little with his pace. I knew my thighs would be mush had I hit the descents as hard as he was hitting them.

This stretch led into the “mile 19” checkpoint (my watch had us well over 22 miles at this point) where our drop bags were and which was where our race started.  I was happy with how fresh I felt, and it was fun getting to talk to the other racers at the checkpoint.  I switched into some dry socks, refilled my water and Osmo, and took off down the dirt road. Again I chose to walk the steeper descents to save my legs despite being tempted to bomb knowing I only had 11 or so miles left.  This road spit us out onto the highway for a 1/2 mile before hitting Riverside Farm for the 10 mile mountain loop.  Here I got reeled by a 50-mile racer celebrating his 50th birthday.  The guy was going strong.

I was about 6 hours deep by this point and caught up with 30 mile race winner Larisa Dannis. When I say “caught up to”, I mean she was sunning herself in a field by the road and had been done for half an hour.  We exchanged a high five, and I stopped to chat for a minute.  She was treating this as a low intensity training run too in preparation for the Western States 100-miler, which is kind of like the Boston Marathon of ultra running.  Needless to say, her low intensity sessions are a bit faster than mine.  After a quick chat, I congratulated her again and went on my way.  To my surprise, this loop was a lot better than the terrain we had been on.  The climbs were steep, but there was very little mud, and a lot of the switchbacks were runnable.  I set a new HR ceiling of 160 because I felt cardiac drift setting in.  My effort level felt the same, but my HR was higher.

Before I knew it, I was on the top of the mountain ready to start the descent to the finish line. Along the way, I passed Michelle Roy, who was running the 500 miler. She was 380 miles into it.  Here I was feeling a little beat up at 25 miles. That really put things into perspective. I told her she was an inspiration on my way through.  I wish I had more detail about this part of the course, but it was really just switch back after switch back… some going up and some going down.  I could almost smell the finish line at this point, so I just put my head down and kept plodding along.

Finally I hit the home stretch and crossed the finish line at 9:12 after the start.  Looking at the picture I definitely didn’t look as fresh as a I felt, but I really did feel great. The pacing and nutrition strategy worked really well, and surprisingly I had reeled in a lot of people in the latter stages of the race. It was almost comical because I could see the pain on their faces, and I had been there so many times. The pain wasn’t comical. It was being at the other end of that look for once.  It has even made me rethink my whole racing strategy.  I definitely had plenty left in the tank, so if I could balance this laid back approach with more periods of pushing it, I think that could be a successful plan.

Right after I crossed, Kale came across the finish as the winner of the 500 mile race.  It was an amazing moment, and his tears almost caused me to have some of my own.  Huge congrats to that guy.  I don’t think I’d ever have the desire to do something like that, and I’m sure running that far for that long (over a week) is an act of sheer will.

A big thank you to Peak Races for putting on such a great race over such fun and challenging terrain.  The course was very well marked making it nearly impossible to get lost.  The BBQ at the end was great too.  It was so much fun, I’m mulling over the 50 or 100 for next year.

Some pics snagged from http://scottlivingston.wordpress.com/